While much of the country is buried under snow and lucky to make it to the grocery store, southern Arizonans are fortunate that local farmers are able to grow fresh, local produce throughout the mild winter and sell it at our year-round farmers’ markets. While March brings warmer days and and fewer chances of overnight freezes, farmers in southern Arizona will continue to harvest cool-weather crops as the season transitions from winter to early spring.

If you’ve spent time at any of the four Heirloom Farmers Markets recently, you’re probably familiar with the hearty winter produce that has lined produce stands since December. Fruits and vegetables like citrus, dark leafy greens and root vegetables thrive in southern Arizona’s cool winter climate. For example, kale’s taste and texture are enhanced by cold weather, which develops its sugars and breaks down fibers to help make the dark leafy green sweet and tender. Oranges only become “orange” when the temperature drops low enough to kill the green chlorophyll that is on their skin. Root vegetables such as radishes, turnips, and carrots serve as a reliable source of food in the winter because they are sturdy enough to hold up for weeks in cold storage.

While market stands will predominantly be piled with greens, citrus, and root vegetables in the month of March, local farmers will have a few new additions to the seasonal produce they haul from their fields to the market. In addition to hearty and long-lasting winter produce, spring’s first bounty will make its appearance in the form of crunchy Napa cabbage, sweet snow peas, and fragrant fennel. Although spring is only just upon us, local farmers are already planting tomatoes, peppers, and summer squash in preparation for the desert’s hottest time of the year.

Farmers Maria and Miguel Quijada, of Wild Child Gardens in Marana, are growing cool-weather crops as they plan for the future. Although the Quijadas only began growing on their Marana-based farm in November and selling produce at the Oro Valley and Rillito Park markets about six weeks ago, the couple’s farming experience is broad. “My grandparents used to have a farm … they were organic back when it was weird,” Maria says. Thanks to her grandparents, Maria started gardening at the age of two and went on to work on farms in New Mexico, Utah, Arizona, California, and Hawaii, where she and Miguel met on a farm in Maui.

The Quijadas knew that they wanted to buy their own farm someday, and set their sights on property in California. However, the devastating wildfires in California last year caused the farmers to reconsider their plans. They unexpectedly purchased a piece of land in Marana, which they named “Wild Child Gardens” after a character in one of Naturalist writer T.C. Boyle’s short stories, and got to work. Despite the fact that the Quijadas have only been growing on their new property for about four months, they have big goals for Wild Child Gardens.

“I like the old processes,” Maria said, explaining how she has grown everything from her own cotton, to the wheat, pumpkins, and eggs that went into last year’s pumpkin pies. Her dedication to natural processes played a significant role in the plans she and Miguel have for their new land. They recently planted 30 fruit trees––from apple and Asian pear, to persimmon and stone fruit hybrids–– at Wild Child Gardens, and hope to someday be able to offer their customers a different variety of fruit every month.

In March, you can expect to find snow peas, beets, turnips, carrots, radishes, radicchio, fennel, purple fava beans, leeks, sorrel, chard, kale, and maybe even the year’s first summer squash at Wild Child Gardens’ farmers market stand. (You can even buy their seedlings to plant in your own garden through the end of the month.) The owners of Wild Child Gardens enjoy using spring produce in non-traditional salads, consisting of chopped and shredded root vegetables––salad turnips, carrots, fennel, beets, and radishes. Maria recommends tossing a few handfuls of peppery arugula and juicy citrus segments in a simple dressing made of fresh orange juice, olive oil, cracked pepper, green onions, and a bit of dijon mustard. It’s a light and bright salad, perfect for a warm spring day.

In addition to a large variety of homegrown produce, the Quijadas will begin to offer one of Maria’s favorite crops––flowers––this month. A bouquet of Wild Child Gardens’ homegrown sunflowers or bells of Ireland are an easy way to brighten your home with the colors and scents of spring. As they continue harvesting cool-weather crops throughout March, Maria and Miguel will also spend the month transplanting many of their warm weather seedlings, like tomatoes, cucumbers, and basil, in preparation for summer. As the Quijadas spend more time cultivating their new land, Wild Child Gardens will continue to offer a larger variety of produce in an effort to help people eat local, fresh, and seasonal food.

Nicole DeVito and Andrew Carhuff of Aravaipa Creekside Growers are preparing for a different warm-weather crop: shiitake mushrooms. Their farm sits only 100 yards from the banks of Aravaipa Creek, is free of pesticides and fertilizers, and utilizes sustainable farming methods like composting, rainwater harvesting, and permaculture. The five-acre property is home to an outdoor hoop house where the couple cultivate a variety of gourmet mushrooms.

While they currently sell oyster mushrooms, Nicole and Andrew plan to offer shiitake mushrooms sometime in the next month. Aravaipa Creekside Growers’ mushrooms will be available until June, when the weather becomes too hot for mushrooms to grow in an uncontrolled climate. Whether you’re a mushroom fanatic or still need some convincing on the mushroom front, Nicole recommends using their mushrooms to make a skillet of creamy mushroom gravy (which can be served over poultry, mashed potatoes, or Nicole’s favorite: cornbread). To make it, simply sauté one pound of chopped oyster mushrooms with onion and garlic. Whisk in chicken broth and cream until the gravy is creamy and smooth, then stir in a sprinkle of fresh herbs. Serve your cornbread and mushroom gravy with cool-weather produce like the turnips, radishes, greens, and grapefruit that Aravaipa Creekside Growers’ sells alongside their mushrooms.

Anne Loftfield of High Energy Agriculture says that her winter crops are highly successful thanks to the fact that she has “gone back to the natural processes” of growing food. One of these processes is the soil, which is enriched with organic compost and never tilled. “You can’t fake real soil,” Loftfield said. It’s in that real soil that she’s growing in-season produce like broccoli florets; lacinato, red Russian, and curly kale; lettuce; and spigariello. Spigariello, which Loftfield describes as “leaf broccoli”, can be used in place of kale in everything from a quick frittata to a bowl of lemony al dente pasta.

“In the Beginning” farm owners Gabe and James Montoya will offer other varieties of winter greens––think arugula, mizuna, and salad mix––for the next two months, as they prepare to harvest large quantities of warm-weather produce. Gabe recently finished planting 8,000 onion transplants, which will be ready to harvest in June, along with thousands of pounds of garlic that were planted in September. While you wait for one of the Montoyas’ seven different varieties of purple-strain garlic, cipollini onions, and heirloom potatoes, they recommend using their greens to make a delicious mixed greens salad. Toss any variety of arugula, mizuna, and salad mix with olive oil, apple cider vinegar, toasted walnuts, and fruit––a most delicious way to pass the time!

When asked what he’ll be bringing to the Rillito Park farmers’ market in March, Joe Marlow of SouthWinds Farm says, “Greens, greens, and more greens,” adding that, “this is the perfect time to eat greens.” You can get your fill with any combination of SouthWinds Farm’s cabbage, spinach, baby bok choy, rainbow Swiss chard, and salad mix. In addition to a plethora of hearty greens, you’ll also find spring produce like fennel, snow peas, snap peas, and Napa cabbage that will help you transition into the new season.

Sleeping Frog Farms, located just north of Benson, is also deep into greens season, offering a bounty of spinach, romaine, arugula, mizuna, collards, and cilantro at their market stand. While the farmers will have plenty of cool-weather produce to harvest this month, they are already planning ahead for warmer weather. “Summer is in mind for sure,” says Sleeping Frog farmer Laurel Goslin, who reports that tomatoes, eggplants, zucchini, and peppers are already going in the ground in preparation for the coming months.

Spring’s coldest month will provide an ideal growing climate for growing leafy greens, hearty root vegetables, and late-season citrus. As the temperatures increase over the course of March, look for signs of spring in the form of peas, fennel, and beets. And, don’t forget to enjoy a few idyllic days at Heirloom Farmers Markets––as our farmers have reminded us, summer will be here before we know it. 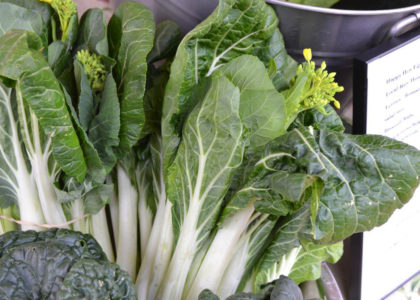 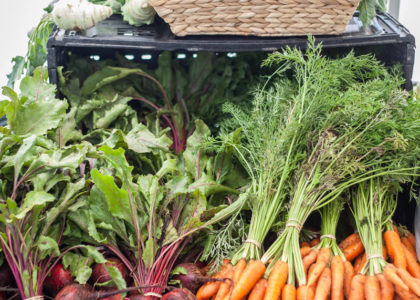